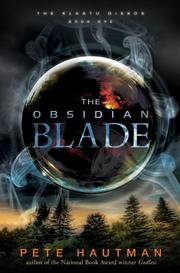 From the Klaatu Diskos series, volume 1

Tucker Feye is an ordinary teenage boy, leading an ordinary, near-idyllic small-town American life—but that's before he starts seeing the "disks." Once the mysterious shimmering phenomena appear, Tucker's preacher father vanishes, then returns with a strange teenage girl and without his faith; Tucker's mother loses her sanity, and eventually, both parents disappear. After moving in with his (previously unknown) Uncle Kosh, the really weird stuff starts happening. However, after a riveting opening scene, the narrative seems to slow to a crawl, but the thorough characterization and careful worldbuilding pay off spectacularly once Tucker discovers that the disks are gateways through time and space. Hautman doesn't make things easy for his readers: As Tucker bounces through historical crisis points past and future, short chapters and steadily ratcheting stakes present life-threatening situations and bizarre personages at a dizzying pace (most of them already-familiar characters with new names or under different guises). That this remains intriguing rather than confusing is a credit to the sure-handed plotting and crisp prose, equally adept with flashes of snarky wit and uncomfortable questions of faith, identity and destiny. Less satisfying are the climactic cliffhangers, which reveal that the entire story is but a setup for the rest of the series.

Part science fiction, part adventure, part mystery, but every bit engrossing; be sure to start the hold list for the sequel