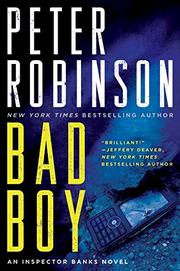 Detective Chief Inspector Alan Banks returns from a reflective U.S. vacation to contend with the abduction of his daughter and the shooting of his female partner.

In the 19th novel in British author Robinson's series, the Yorkshire inspector has no sooner gotten over the emotional fallout of the terror attack and romantic betrayal of his last adventure than he is hit with a double dose of upsetting news: His 24-year-old daughter Tracy is being held captive by a drug dealer being sought on a gun charge, and his partner and former lover Annie Cabbot is in critical condition after being shot by the dealer. Complicating matters is the fact that Tracy and the dealer, Jaff, the slick boyfriend of one of her flat mates, were sexually involved before life on the lam turned bad. It's up to Banks and his supporting cast of Eastvale cops to link Jaff to an unsolved killing from several years back and a brutal gang involved in the sex trade. The threat to Tracy is kept at a low boil; even after Jaff ties her up and rapes her, in her father's bed, the two act like any sparring couple. Her acting out with drugs, piercings, an assumed name and an unstable bad boy because her father neglected her in favor of his rock-star son Brian is superficially handled. And Annie's recovery is never in doubt. But the recharging feelings between Banks and Annie raise expectations for the next installment.

A lightweight but entertaining outing.