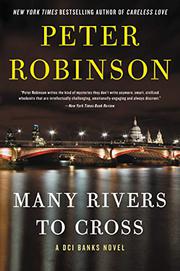 MANY RIVERS TO CROSS

Many murders to solve, too, in this latest thicket of felonies for DCI Alan Banks and the staff of the Eastvale Police (Careless Love, 2019, etc.).

Why would whoever stabbed Syrian immigrant Samir Boulad to death take the risk of dumping his body in Edith Grunwell’s trash bin, where the retired nurse found him when she took out her trash? Although Malden Terrace is no more immune from nativist racism than other neighborhoods, the traces of cocaine in the dead boy’s pocket hint at equally sinister connections—from low-end Howard Stokes, a diabetic heroin user found dead in his home, to high-end developer Connor Clive Blaydon, an associate of Albanian Mafia stalwart Leka Gashi who’s more recently partnered with equally dodgy Timmy and Tommy Kerrigan to build Elmet Centre, which, Blaydon piously assures Banks, will do the area no end of good. As Banks and his team make their inquiries, police consultant Nelia Melnic, who’d rather be called Zelda, has problems of her own. A superrecognizer rescued from sex slavery to become a valuable asset to the constabulary and a self-appointed seeker for Phil Keane, an associate of the brothers who first kidnapped Zelda 20 years ago and who almost killed Banks when he set his house on fire, she’s upset to learn that her boss, Trevor Hawkins, has died in an equally suspicious house fire and upset in a completely different way when she suddenly bumps into Goran Tadić, one of her kidnappers. There’ll be precious little downtime for Banks and company, as they’re forced to deal with more mystery, more murder, and some uncomfortable moral conundrums posed for both the characters and readers before Robinson pulls down the curtain, not with a bang but with a final piercing twist.

Reliable procedural entertainment from a pro’s pro, with an ending that guarantees more drama ahead.