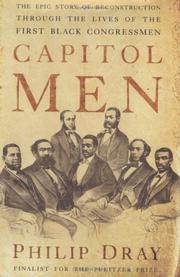 Impeccably written study of the brief post–Civil War period in which African-Americans were admitted to Congress—with the door subsequently closed to them for the next century.

From a white Southern loyalist’s point of view, writes Dray (Stealing God’s Thunder: Benjamin Franklin’s Lightning Rod and the Invention of America, 2005, etc.), military defeat was bad enough, let alone what a Union sympathizer called “the elevation of the free negro to equal political power.” The first to be so elevated, at the local and then national level, were a fascinating lot. Some of them, such as South Carolinian Robert Smalls, had engaged in acts of resistance during the secession and courted death for their crimes of sedition; others were of mixed race and comparatively well educated, such as the Mississippian reformer John Roy Lynch, “distinguished in appearance, possessing an innate gentlemanly reserve”; others were freed slaves with few advantages aside from a willingness to take on the job. None were the illiterate sock puppets of anti-Reconstructionist myth. Bringing them into power was a complex and daunting task, opposed by many in both the North and the South. In that light, Dray writes sympathetically but critically of Andrew Johnson, the Unionist Southerner, “a stubborn loner never adept at conciliatory politics,” under whose watch Reconstruction disintegrated. The denouement of Dray’s story is dispiriting. It finds Smalls, that great hero, ordered to sit in a segregated Jim Crow train cabin, a “dirty coach with cigar stubs on the floor and broken windows,” and the other freshmen congressmen not much better treated. The humiliation of Smalls took place in South Carolina in 1904. But then, as Dray notes, the same had happened to him in Philadelphia during the war—racism was not the exclusive domain of the South.

A welcome addition to the literature of the Civil War and Reconstruction Era, and important for students of the civil-rights movement and its origins.