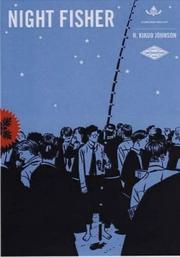 The lulling beauty of Hawaii proves a troubling soporific for a quiet and once-promising teenager.

Johnson’s debut is not only remarkably assured but astonishingly fresh, one that refuses to trade in the usual hoary high-school clichés. Loren Foster moved from Boston to Maui six years ago with his dentist dad so that he could set up his own practice. Now they live alone in a massive house that they probably can’t afford, the too-big yard proving a jungle-like adversary that must be battled constantly (this is a naturalistic piece of work in which the island itself is as much a character as any of the humans). Loren goes to high school, though even years after arriving, he doesn’t seem to have quite adjusted. His friends are few and the best one he has, an inveterate social chameleon named Shane, often completely ignores him; the one thing they used to share, going night fishing, they’re doing less and less, though it figures prominently in Loren’s dreams. Things change, though, when Shane introduces Loren to a band of druggies who indulge in petty crimes to get the cash for their fixes. At this stage, the straight-laced Loren starts slipping: falling asleep in class, blowing off his father, wandering through the warm tropical days in a haze. What really stands out about Johnson’s work is not his tale of Loren’s growing antisocial tendencies, but the manner in which it is transformed into something greater. The artwork is truly something to behold, its dramatic and transformative lines recreating the island’s lush modernity with a sensual power. Panels are shuffled together with a cinematic flair that highlights the florid emotions of adolescence far better than any battery of melodrama could.

A dark, grand, sweeping dream of a book.