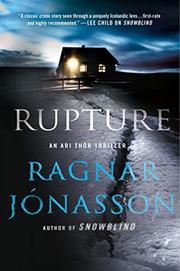 Jónasson returns from his recent Icelandic stand-alone (The Darkness, 2018) to an equally bleak puzzle for Ari Thór Arason, of the Siglufjördur police.

Just in case the northern Icelandic town isn’t isolated enough by geography and climate, Siglufjördur has been under quarantine ever since a wealthy traveler arrived with a particularly virulent strain of haemorrhagic fever. It seems only appropriate that at a time when Ari Thór’s department (Nightblind, 2017, etc.) is in virtual lockdown, a man named Hédinn pressed him to reopen the ice-cold case of Jórunn, Hédinn’s aunt, who got a fatal dose of rat poison more than 50 years ago in nearby Hédinsfjödur. Nearby, but even more isolated, the place, devoid of electrical and telephone wires, has been uninhabited ever since Hédinn’s father, Gudmundur, retired from the fishing industry to settle his wife, Gudfinna, her sister, Jórunn, and Jórunn’s husband, Maríus Knutsson, in the godforsaken spot. Ari Thór’s attention immediately focuses on a family photograph from 1957 that includes a young man Hédinn can’t identify. But his exploration of the past is sidelined by the hit-and-run death of Snorri Ellertsson, an aspiring musician whose scandalous abuse of alcohol and drugs ended the career of his father, prominent politician Ellert Snorrason, and the kidnapping of Kjartan, a little boy taken from his pram while it was parked outside a cafe in which his mother, Sunna, was having coffee with her sister, trusting in Iceland’s low incidence of crime outside the pages of genre fiction. Along the way, Ari Thór’s inquiries will repeatedly crisscross those of Ísrún, an ambitious TV reporter whose initial assignment to report on the quarantine blossoms into a series of revelations much darker and deadlier.

Readers disappointed in the present-day subplots, which are wound up with remarkable dispatch, will be rewarded by the even more disturbing revelations from half a century ago.