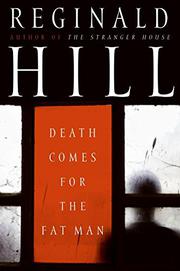 DEATH COMES FOR THE FAT MAN

The title of Hill’s latest establishes the fear that the author, with the help of some terrorist bombers, will kill off Andrew Dalziel, the gargantuan eminence of the Mid-Yorkshire CID.

When PC Adolphus Hector, unimaginative and none too bright, investigates a disturbance in the Arab-language video shop at 3 Mill Street, and reports that he may have seen a man with a gun, alarms go off for Supt. Andy Dalziel and Chief Inspector Peter Pascoe (Good Morning, Midnight, 2004, etc.). Together they throw a cordon around the shop, and they’re both on hand when it blows up, taking several neighboring storefronts with it and sending Fat Andy to the hospital, where he hovers between life and death for 400 pages. Pascoe, meanwhile, is impressed into the Central Antiterrorism Unit, where he rubs shoulders with high-ranking cops, no-name spooks and at least one colleague who’s presumably leaking information to the Knights Templar, the home-grown anti-Muslim cadre responsible for the outrage. The will-he-live backdrop imparts extra urgency to Pascoe’s tactics, which are fully worthy of the profane mentor he’s avenging. At the same time, there are possible dalliances for Pascoe and his wife, Ellie, and many a romp through the comatose brain of the Fat Man.

Hill, returning to his long-running series after a crossover break (The Stranger House, 2005), produces a work as richly satisfying as steak-and-kidney pudding.