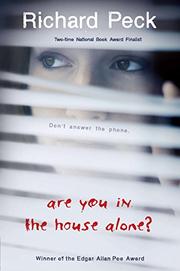 ARE YOU IN THE HOUSE ALONE?

Gail Osborn's ordeal begins with an obscene note pinned to her school locker, builds until she is raped and beaten by her best friend's disturbed steady, and is intensified throughout by her isolation—first, when family, friends, and counselors are indifferent or incapable of reacting to the anonymous threats, and, later, when a sneering police chief and timid, hypocritical townspeople dissuade her from prosecuting a boy from a prominent family. The rough stuff is discreetly elided from both the notes and the attack itself. But Peck's view of affluent Connecticut, and of Gail's snobbish, self-centered parents in particular, is harsh enough. Distortingly harsh, and insofar as Peck presents this as an accurate profile of rape and its aftermath, readers might conclude that it's futile for any victim to seek protection or justice. As we expect this to be read as a chiller rather than a case study, we'll rate it medium cool—fast-paced and frighteningly accurate but without the quality of inevitability that keeps one awake after lights out.