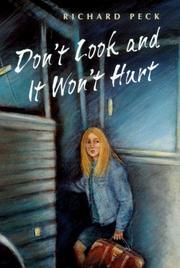 DON'T LOOK AND IT WON'T HURT

Life on the wrong side of the tracks when the tracks are in Claypitts the "Pearl of the Prairie" isn't much to brag about, and Carol, with her ready self-deprecating wit would be the first to admit it. But when older, wilder sister Ellen falls for a pot dealer (disguised as anti-draft organizer) and uses her resulting pregnancy as a not unwelcome excuse to get away to Chicago, Carol is determined to go up there and convince her that at least one member of the family still cares enough to want her back. Don't look and it won't hurt — Carol's advice to Ellen who's wondering how she can bear to give her baby up for adoption — is neither true nor very comforting, but Claypitt's teenage characters bend themselves to cheerfully hard-boiled sarcasm — particularly tough Mitsy Decker ("Look, I've been around") and the precociously poised minister's daughter Shirley Gage. It won't hurt if you read it for the humor, but don't look for any hidden profundity.