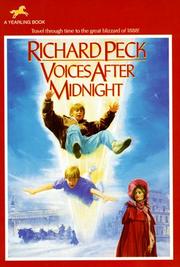 Chad—a frank, ingenuous 14-year-old Californian—tells what happens when his family rents an old New York town house on East 73rd for two weeks one summer: farewell to beaches and barbeques, hello Central Park and—after slipping into several other times—the Blizzard of 1888. Chad's little brother Luke has always been able to see the Indians walking through the utility room at home, or fields as they were years ago. Now, as the one to suspect that he and Chad are urgently needed in the past, he's the leader; a wise child more interested in history than in the present, he's already begun to dream about the snow. So, inexplicably, has Chad. Even mod, self-absorbed older sister Heidi finds her way back to 1888 to attend a ball just before the blizzard. To what end? The rescue of two young ancestors in distress—if they can find them before they freeze to death. Putting the Californians in New York gives Peck a chance to poke gentle fun at both city and suburb, while giving an apt tongue-in-cheek characterization of adolescence: "We used to be a family with a mom and a dad, two brothers, and a sister. Then Heidi hit high school, and we became a mom, a dad, two brothers and an alien." A quick-moving, neatly plotted time fantasy, with thoroughly likable characters, bantering dialogue, and just the right touch of romance.