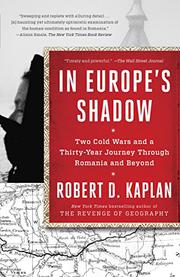 Romania was a journalistic backwater when the author’s bestselling Balkan Ghosts appeared in 1993. In this equally captivating sequel, veteran journalist Kaplan (Asia's Cauldron: The South China Sea and the End of a Stable Pacific, 2014, etc.) brings matters up to 2015.

The Ukraine is across the border, Russia and the Middle East just beyond; all are hot spots putting increasing stress on Romania, which is making remarkable progress after 40 miserable years as a Soviet satellite following 10 as a Nazi ally. Its leader during the final 24 years of Soviet rule, Nicolae Ceausescu, enjoyed praise from the free world for his independence from Moscow, but he ran a particularly oppressive and corrupt government, “nothing less than a very Latin-style tyranny, a blend of Joseph Stalin and Juan Perón in the underbelly of Eastern Europe.” His murder by revolutionaries in 1989 left an impoverished nation with no democratic traditions, a situation that Kaplan described vividly in Balkan Ghosts. Repeating his technique in this book, the author zigzags around the country and occasionally beyond, admiring the landscape, describing the cities (crumbling Stalinist architecture giving way to vast malls and apartment complexes, with the occasional jewel from earlier centuries), and interviewing government officials, surviving apparatchiks, intellectuals, historians, and fellow journalists. He seems to have read every novel, history, and scholarly work on his subject and quotes liberally, delivering a scattershot, often contradictory, and always entertaining avalanche of opinions on Romania’s history, national character, and worries (mostly, again, about Russia).

Kaplan does not promote Romania, but he has written a journalistic tour de force that will convince readers that it’s a fascinating place whose people, past, and current geopolitical dilemma deserve our attention.