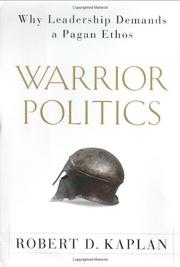 Why Leadership Demands a Pagan Ethos

Just in time for the post–World Trade Center era, a hardheaded, eerily prescient view of American geopolitics in a dangerous century.

Journalist Kaplan (Eastward to Tartary, 2000, etc.) is unapologetically conservative in his diagnosis of what has, since he wrote, turned into the country’s foreign-policy nightmare: the rise of media-amplified populism, premature and thus unstable democratic movements around the world, and concentrations of citizens in urban areas and economic power in regimes whose abundant targets are an open invitation to the terrorists and cybercriminals our soldiers have never been trained to fight. Looking as far back as Sun-Tzu and Thucydides for parallels and advice, he urges “power politics in the service of patriotic virtue”—a pragmatic choice of Churchill’s “moral priorities” over absolutist idealism and of Machiavelli’s “anxious foresight” over Marxist or fundamentalist determinism. The main ingredients of this internationalist realism are an old-fashioned sense of national patriotism, an “evolution from religious virtue to secular self-interest,” and an acknowledgment that “international relations are governed by different moral principles than domestic politics.” Hence, successful geopolitical strategies may require leaders, insulated from the assaults of a powerful multi-media press whose “moral perfectionism is possible only because it is politically unaccountable,” to deceive even their own citizenry, as FDR did in piloting the Lend-Lease Act through a reluctant Congress and easing the nation closer to the Grand Alliance. Calling on such thinkers as Livy, Hobbes, Malthus, Kant, and Isaiah Berlin, Kaplan counsels a selective internationalism that never forgets that “even the most dire situations can have better and worse outcomes.”

A timely brave-new-world primer almost impossibly rich in quotable maxims. Even readers who recoil from Kaplan’s prescription for global governance based on a new American imperium will find this empowering instant classic essential ammunition for any debate about what to do next.