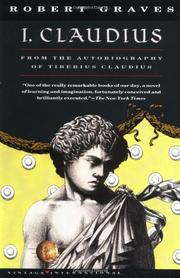 Fictionized biography of a Roman emperor, who lived at a strategic period in the history of the empire.

A book that some will read because they think it should be read, and will be pleasantly disappointed at finding it very entertaining, although not conventionally popular. The author has told his story as though it were an autobiography, in which lame, stuttering, weak Claudius writes his own story, in modern style, giving from the inside the plots and counterplots, the intrigues and loves and hates and vices and virtues and scandals and skeletons of his family and the court. The story goes through the long reign of Augustus, to Tiberius, Caligula and his own accession, with all the vast spectacles and ceremonies. The people—hither to names on the pages of ancient history to most of us—come alive.

A book that should rate leading reviews, and that those who like historical fiction and biography will find worth reading.