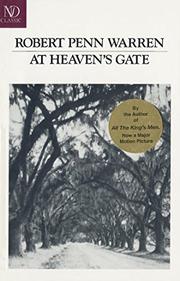 There's brilliance here, power too, in a novel of the South in the late '80's which is sometimes scathing, sometimes militant, consistently incisive — and which — with a hard precision, presents a group of people in conflict. Dominating them is Rogan Murdock, smooth, successful financier speculator who with no scruples, no heart, has achieved a throttlehold on the State; in revolt against him are the labor organisers, the dispossessed farmers, the intelligentsia — and his own daughter, Sue. Reckless, hostile, restless, Sue breaks her engagement to Jerry because he is her father's man, drifts into a Mohemian group of University men led by a poet and a pervert, Milm, with whom she sleeps when he defies her father. Finally, she goes to live with a labor organiser, Sweetwater, and becomes pregnant. He wont marry her, and ilm, ridiculed once too often, strangles her, and Bogan Murdock's money empire is broken. Narsh, dynamic, convincing, but certainly not pleasant reading nor a book for a wide popular sale.