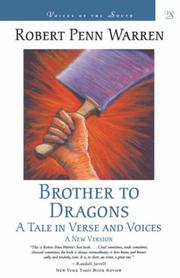 A Tale In Verse And Voices (voices Of The South)

Warren's novels, with one or two exceptions, are terrible; his early poetry, though estimable for its linguistic ripeness and its heart and its astonished American innocence, was often a clustering mess of eloquence. But in the last dozen years or so, Warren has simplified, toned down—at least in his poetry—and achieved a directness many find extremely affecting. This narrative poem in different voices, first published in 1953, has been reworked to conform to the chaster Warren. It takes occasion from the real-life 1811 crime, described in Boynton Merrill, Jr.'s Jefferson's, Nephews (1976), in which two Kentucky nephews of Thomas Jefferson, Lilburne and Isham Lewis, hacked a Negro slave to parts, Speaking as himself—R.P.W.—and giving speaking roles to Jefferson, to Lilburne, to Isham, and to others connected, Warren probes not only the agony and violence of the act, but chiefly Jefferson's from-the-grave response to the across-the-board brutality and blood that accompanied his democratic vision. Innocence denied by history and evil, seems to be the theme, and though it's larded here and there with hyped-up eloquence ("this period of the final tumescence/From fat oubliettes of inwardness/ Let Lilburne speak"), Warren has done well in this new version; the marriage of narrative and decreased poetic assertion produces a strong work.