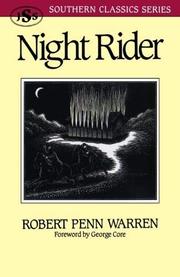 Here's a book that may prove important from the angle of critical acclaim but that will scarcely class as popular in its appeal. Warren is well known as critic, poet and editor of the Southern Review. His style is sensitive, rhythmical, with brilliant flashes of portraiture and description of the tobacco country. It is a story of a secret organization, formed to organize the growers into a cooperative group, but forced to adopt terroristic measures to achieve their results. The emotional side of the story is handled obliquely, and not very convincingly. The period is today — and the book as a whole is a challenge to our presumably modern social conscience. It is over-long, but has many passages of exceptional writing.