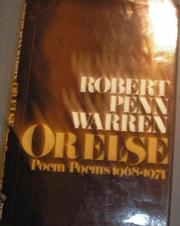 Conceived, perhaps, as a single long poem, yet all these sections really have in common is time and the American poet who voices them — nay, narrates them — nay, declaims them. For these are surging epical verses that rush ecstatically from natural images to philosophic observations and beg for dramatic reading. Central concerns are the pursuit of knowledge and the vicissitudes of aging. Warren returns more than once to a past that expired before he knew "the truth, which is: Seize the nettle of innocence in both your hands, for this is the only way. . . ." He recalls a white Christmas out of his childhood and a drunken adolescent spree in New Orleans spouting Milton enthusiastically; there are visions of long-dead parents and a flash of the continuity of tense — his own son grown old and in his good turn remembering what was. "Is was but a word for wisdom, its price? . . . meaning [we might read 'poetry'] inheres in/ The compulsion to try to convert what now is was/ Back into what was is." But then certain cameo poems intrude into this very personal sequence — "Homage to Theodore Dreiser," "Flaubert in Egypt," the very impressive "News Photo" of a man acquitted of murdering a minister "Reported to Be Working up the Niggers" — that break up its unity at random. An uneven work by a distinguished man of letters, better known for his achievements in other genres.