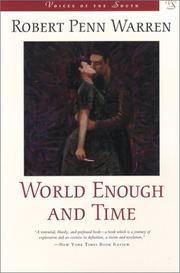 Short story writer, poet and Pulitzer Prize Award winner with All the King's Men, Robert Penn Warren has established his right to speak for his native Kentucky — as well as for his adoptive Louisiana. And Kentucky is once again the background and integral part of this long novel, the story of Jeremiah Beaumont. The period — early 19th century, finds Kentucky still a frontier, with the inevitable conflicts between frontier viewpoints and those of an encroaching civilization. From a background representative of those conflicts comes Jeremiah, and the story tells of his brief journeys into the other world represented by his violent grandfather, of his chance for an education in the law, of his tutelage under the esteemed lawyer and politician, Fort. Then Rachel comes into his life. His passionate and erratic courtship culminates in first a promise to kill Fort, who had betrayed her, and then marriage, the promise unfulfilled. Jeremiah's twisted conscience drove him, this way and that; Rachel's abnormal and frustrated emotions — and their strange, perverted relationship —drove him further, and eventually he killed. Fort. A large portion of the book is concerned with the trial, while Jeremiah's confession and apologia is woven into the very texture of the story. Eventually, on the very verge of execution, his friend, (who is proved finally to have been his betrayer) Wilkie, engineers his escape, with Rachel, against whom his anger has turned. There's another strange interlude of seclusion in a western island colony — then Rachel's death and eventually Jeremiah's violent end. An unusual and difficult book —oddly dated in style and substance, but an authentic mirroring of the moods and passions of the times.