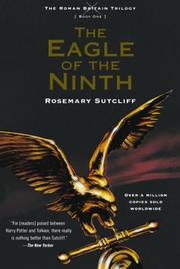 THE EAGLE OF THE NINTH

A fresh background this, and one that is its own reward in an unusual story of Britain under Roman suzerainty. The conflict with the native tribes was sporadic, and demanded the Roman Legions. Marcus Flavius Aquila, whose father had commanded the First Cohort of the Ninth Legion- lost, unexplained, somewhere in Britain, is on his first command when the story opens. By its close, he has won his honors in a hard cause,- wounded, permanently crippled, in one action, achieving the impossible in reclaiming the lost eagle of his father's command- and clearing up the mystery of its disappearance. He has learned too what it means to accept defeat —to put down roots in a new land- to find friendship and love. Maturely conceived, grounded in scholarship.