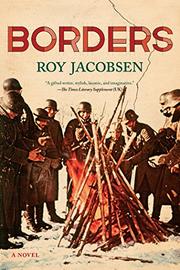 In the immediate aftermath of World War II, a son named Robert is born to Maria, a Belgian teacher and nurse, in the Ardennes, a borderland region spanning Belgium, Luxembourg, France, and Germany.

That tale opens Jacobsen’s (Child Wonder, 2011, etc.) latest, but it’s one of multiple stories weaving through multiple lives in a narrative moving fitfully from wartime Luxembourg to Stalingrad’s slaughter and then on to the 1960s. No individual character drives this novel. Instead, there are a handful of principals whose lives intersect like forgotten trails in the Ardennes wilderness. Maria, nursing Allied wounded during the Battle of the Bulge, falls in love with a shellshocked American soldier, but he later disappears without realizing she’s pregnant. Robert, her son, grows to love and rely upon his godfather, Markus. Despite being of "ambivalent nationality," Markus had followed his fascist son into Germany’s Wehrmacht, where he was wounded and temporarily rendered sightless on the eastern front. Back home, obsessed by his son’s disappearance at Stalingrad, he chooses to live as a blind man. Another affecting character is Léon, drafted by the Nazis, fractured by the war. Held prisoner first by the Nazis and then by the Allies, he came home with a "permanently vacant smile." Historical characters appear too, like German generals Manstein and Paulus, those two sketched insightfully. The novel is replete with metaphor and parable, Jacobsen even using his setting symbolically: there's the River Our, a natural bridge across national boundaries and the impenetrable Ardennes, never fully revealing itself or the brutality it conceals. Jacobsen analyzes the nature of fiction and nonfiction; delineates the psychological parameters—borders—within which we live as individuals; and, while referencing tiny Luxembourg at Europe’s core, reveals the inevitable conflicts that arise when humankind imposes artificial distinctions.

An artful deconstruction of nationalism through the prism of personal loss and reconciliation. Read Jacobsen's novel carefully to savor its images and themes.