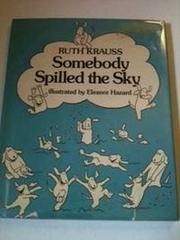 SOMEBODY SPILLED THE SKY

Drizzle tonight off the east coast of my head," reads Krauss' weather report, assuring old admirers that her head still grooves to its own isobars; and "b Ballet" encourages readers to let go too: ". . . be a button they push you and the moon comes out." Besides the ballet, she comes up with offbeat operas ("littlekid opera" consists almost entirely of "Bow wow wow" repeated), plays ("Bells" has a man deliver the sun to a little girl's apartment), songs, and a "sonnet" in which each of the 14 lines consists of the one word NO. (The title, perversely, is "Ten Nos," and the pictures show ten naughty rabbits provoking them.) Not everything here is new; for example, "beginning on paper," which ends "I write my name," reaches back to Krauss' 1970 picture-book-length "I Write It," and "A Beautiful Day" (complete text: "GIRL: What a beautiful day)/THE SUN falls down on the stage.") is straight from The Cantilevered Rainbow, published in 1965 for ages 13+. Reviewers then found the selection too avant-garde for teenagers, and perhaps it will find a wider audience in the freer picture-book world—though who's to know if it will say more to this age group? But the main problem here is that Hazard's illustrations aren't wiggy enough to make the most of it. Her children cavort jubilantly, and her animals—the rampaging rabbits, lambs romping in poppies, dogs cutting up in a classroom—are cute enough for a more everyday show of high spirits. But she throws away the title line with a blue splot, and overall her ordinary-looking black line and pale blue pictures betray a literal, linear sensibility when what is called for is the abandon of Bileck's Rain Makes Applesauce.