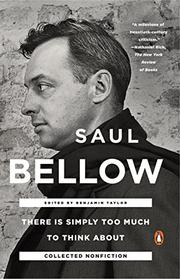 THERE IS SIMPLY TOO MUCH TO THINK ABOUT

A nonfiction collection celebrates the centennial of Saul Bellow’s (1915-2005) birth.

Nobel Prize winner Bellow was a prolific writer of nonfiction: essays, reviews, interviews, talks and memoirs. Organized by decade, the 57 pieces in this volume, edited by Taylor (Naples Declared: A Walk Around the Bay, 2012, etc.), trace both Bellow’s writing career and his outspoken opinions on politics, literature and intellectual life in America during the second half of the 20th century. After publishing Dangling Man (1944) and The Victim (1947), “two very correct books” that he thought would establish his credentials as a novelist, Bellow won his first National Book Award in 1954 for “a speculative biography,” The Adventures of Augie March. Critical acclaim for that novel established his reputation; many more prestigious awards followed, as did opportunities to publish his views. Some of the most interesting pieces here are autobiographical. Born in Canada to Russian immigrants, growing up in Depression-era Chicago, Bellow knew early in his life that he wanted to be a writer. “I felt that I was born to be a performing and interpretive creature,” he wrote, “that I was meant to take part in a peculiar, exalted game.” As a young man, he looked up to such critics as Edmund Wilson, who supported him for a Guggenheim Fellowship, but by 1975, he had changed his mind dramatically: “Critics use strength gathered from the past to pummel the present,” he announced scornfully. Nevertheless, Bellow found himself in a critic’s role throughout his career, deriding novelists who were didactic and those more interested in being intellectual over telling a good story. He also bristled at being categorized as a Jewish writer: “I was a Jew and an American and a writer and I believed that by being described as a ‘Jewish writer’ I was being shunted to a siding.”

This comprehensive collection illuminates Bellow’s sense of his own identity and his changing world.