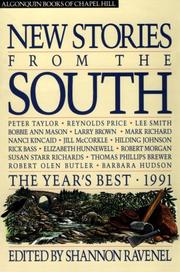 NEW STORIES FROM THE SOUTH

Now that this excellent series is firmly established among must-read annuals, Ravenel should skip the apologetic introductions in which she repeatedly tries to justify the regional basis for her anthology. The evidence speaks for itself here—16 stories by or about southerners that embrace a wide range of literary and geographical experience. Many of the stories focus on coming-of-age in the South, from Nanci Kincaid's teenage girls hanging out at a Tallahassee movie theater (``This is Not the Picture Show'') to Jill McCorkle's shy young girl who lives vicariously through the postcards form her wild, older sister (``Waiting for the Hard Times to End''). Young people deal with domestic tragedy in Barbara Hudson's ``The Arabesque,'' the story of two sisters confronted by their mother's madness and early death; in Rick Bass's ``In the Loyal Mountains,'' a beautifully written profile of the narrator's big-spending Texan uncle who commits suicide rather than suffer the consequences of his shady business dealings; and in Reynolds Price's overwrought ``His Final Mother,'' a boy's meditation on his mother's sudden death. Lee Smith's ``Intensive Care,'' the story of a former high-school nerd who pursues an improbable passion, confronts death with a healthy dose of schmaltz. The least convincing narrative voices here include the successful Vietnamese immigrant in Robert Olen Butler's ``Relic,'' the young grandmother of Bobbie Ann Mason's typically hard-luck ``With Jazz,'' and the drunk and sexually inadequate good old boy of Larry Brown's ``Big Bad Love.'' The strongest pieces range from Mark Richard's hilarious and sad tale of boys in an orphanage hospital on Christmas Eve (``The Birds for Christmas'') to Susan Starr Richards's unusual paean to porch life and the strange bonds of sisters in ``The Screened Porch.'' Robert Morgan's story of a Civil War-era stone mason (``Poinsett's Bridge'') and Thomas Phillips Brewer's riff on southern junkies (``Black Cat Bone'') add an interesting dimension to a somewhat homogeneous volume. Peter Taylor's graceful and evocative ``Cousin Aubrey'' easily earns its lead-off position. Once again, southern fiction mostly at its best.