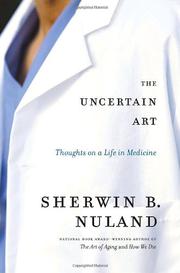 Thoughts on a Life in Medicine

by Sherwin B. Nuland

An assortment of essays by National Book Award winner Nuland (Surgery/Yale; The Art of Aging: A Doctor's Prescription for Well-Being, 2007, etc.).

All but one originally published in the American Scholar, these meditations concern the uncertainty inherent in the art of medicine, the necessity of integrating the humanities into a medical education too focused on technology and research, the boundaries of medical responsibility and the limits of physicians’ authority. The author even dares to predict medical advances that will come in the 21st century. Several pieces address the history of medicine: stories of grave robbers; a survey of ancient and not-so-ancient beliefs about the bowel; an analysis of how medical beliefs are reflected in language (“liver” and “life” have the same root, because that organ was once seen as the seat of life); and an appreciation of Thomas Eakins’s two wildly different but equally perceptive portraits of physicians, The Gross Clinic and The Agnew Clinic. Into these ruminations Nuland inserts personal stories: the happy results of his own weight-training program, his thoughts on the art of writing, his observations of and speculations about the effectiveness of acupuncture as an anesthetic during surgery and a lighthearted trifle on what it is like to hear the words, “Is there a doctor in the house?” The most moving essay, written for this collection, is a warm tribute to a man who was awaiting a heart transplant at the same time that Nuland was planning an article on heart transplantation for the New Yorker. George Leyden agreed to record his thoughts in a daily journal titled “The Musings of a Heart Transplant Candidate,” which he kept from the time the two men met until a week before his death some eight months later. Nuland quotes extensively from this wrenching, revealing journal in his profile of Leyden, whom he came to admire greatly for his honesty and courage.

A slightly scattershot collection, but, as usual for Nuland, more hits than misses.