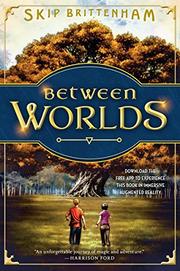 Teen misfits accidentally discover a portal to a dangerous fantasy world in this immersive book/app combo.

Bullied nerd-type Marshall and proudly nonconformist new girl Mayberry (white, relatively blank-slate characters) decide to investigate a local legend about a grove in the middle of a forest and the magical Wishing Tree in its center. They jokingly wish for a magical adventure in a new world and then fall asleep at the foot of the tree. Initially, it’s great fun, but soon they encounter a chain of life-threatening dangers and vicious creatures, the final one a violent Troll-man with a white human slave (readers will quickly make a connection with the prologue, undermining the characters’ discovery later in the book). The villainous Troll-man teaches the teens magic in order to make them tools in his plan, the goal of which is murder and conquest. While the earlier parts of the adventure read like a walking tour and introduction to the land and its inhabitants, a later storyline—to save the other human—is where the story really picks up steam. The ending leaves plenty of wiggle room for other adventures in the magic world, Nith, as well as possible mishaps with powerful magical objects. The book will release alongside an app that uses a smartphone’s camera and the book’s illustrations to “create” 3-D animated models; it also gives bonus world information in the form of Mayberry’s diary, with planned additional interactive features. (The preview app consists of clean, high-quality sample character models and animation based on the full-color images; most full-color images not seen but likely will be the base of the full app’s materials.)

This fantasy relies on technology to stand out.