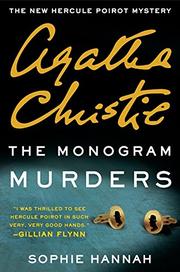 It doesn’t take long for Poirot to realize why the woman he encounters in Pleasant’s Coffee House is all in a dither. She’s afraid that she’s about to be killed, and she can’t bring herself to run from her killer, since death is no more than she deserves. She flees before he can pin her down to specifics, but he soon links her to three deaths at the nearby Bloxham Hotel. Each of the guests—retired lawyer Richard Negus, his former fiancee, Ida Gransbury, and their old friend Harriet Sippel—arrived separately the day before; each was poisoned with cyanide, then neatly laid out on the floor; and each is found with a monogrammed cufflink in his or her mouth shortly after someone turns in a note to the Bloxham’s front desk with their three room numbers and the epitaph, “MAY THEY NEVER REST IN PEACE.” Clearly this triple homicide has roots too deep for Poirot’s temporary housemate, Detective Edward Catchpool of Scotland Yard, to fathom. So Poirot attaches himself to the case, uncovering evidence about the victims’ shared past in a village scandal 16 years ago, alternately lecturing and hectoring Catchpool, and sounding very little like Agatha Christie’s legendary sleuth except for the obligatory French tags. Hannah, a specialist in psychological suspense (The Orphan Choir, 2014, etc.), would seem an odd choice for the job of resurrecting Poirot. The main strengths she brings to her task are a formidable ingenuity and a boundless appetite for reviewing the same evidence over and over again. The herrings-within-herrings denouement, which goes on for 100 pages, hovers between tour de force and unintentional farce.

Despite the names and dates, this authorized sequel will remind you less of Christie, whose strengths are very different from Hannah’s, than of the dozens of other pastiches of golden age detective fiction among which it takes its place.