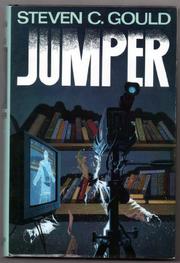 Sprightly first novel combining revenge, growing up, lonely- superman and abuse-of-power motifs centered on a classic science- fiction theme: teleportation. Davy Rice, 17, lives with his drunken, brutal father in Stanville, Ohio, enduring physical and mental abuse (his mother had vanished five years ago) until, one day, rather than endure another vicious beating, he finds that he's teleported himself—''jumped''- -into the local library! From this starting point, Gould works up a fine set of complications with which to test his characters. Davy, afraid that his dad will find him, flees to New York, where he robs a bank—by teleporting inside the vault—and lives the life of a reclusive millionaire. He meets and falls for psych major Millie, while learning to control his gift and also use it as a weapon. After learning of his grandfather's death, Davy makes contact with his mother and learns why she was forced to disappear (Dad beat her nearly to death). But, just as their relationship begins to coalesce, she's murdered (purely at random) by terrorists. Davy pledges himself to locate the terrorist responsible, but finds it's not so easy: Terrorists come in different varieties with different demands; and the US government is taking a strong interest in Davy's spectacular terrorist-busting activities. And constantly Davy is plagued by one big question: Are there any others able to ``jump''? The answer seems to be no. Eventually, after trying to capture him with tranquilizing darts, the NSA tries to pressure Davy into working for them by kidnapping Millie. In return, Davy snatches the agent responsible and reaches an agreement: Millie's released while Davy remains uncommitted. An exceptionally well-organized debut, with thoughtful ideas, a controlled plot, and characters—particularly the young protagonist—portrayed with insight and compassion.