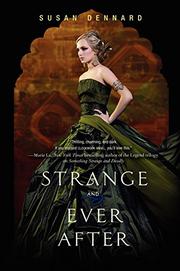 STRANGE AND EVER AFTER

From the Something Strange and Deadly series, volume 3

Eleanor Fitt, the Spirit-Hunters, her demon and her newly arrived frenemy from Philadelphia take to the skies in an airship in pursuit of the evil necromancer Marcus.

They head first to Marseille, where they hope to learn the secret location of the fabled, wealth-and-immortality–granting monster known as the Black Pullet and to rescue their friend Jie, under a compulsion spell and in the clutches of Marcus. From there, they speed on to Egypt in hopes of beating Marcus to the Black Pullet and putting an end to him once and for all. Readers of the series will not be surprised to find that the doughty heroes are beset by the Dead at nearly every turn; the Egyptian setting, at the height of the 19th-century invasion of Western archaeologists, makes especially fertile ground. (All those mummies!) Less satisfying is Eleanor’s constant struggle between the allure of her magic and the disapproval of everyone around her, including inventor love interest Daniel and, remarkably, her own demon, Oliver. Dissolute Oliver has easily become the most intriguing character in the series, with unplumbed depths, a deliciously snarky sense of humor and a singular sense of morality. Almost despite herself (it gets quite complicated there toward the end), Dennard wraps it all up with a satisfyingly apocalyptic conclusion.