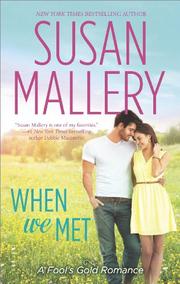 Angel Whittaker and Taryn Crawford are both new to Fool’s Gold, with pasts that have forged them into successful professionals with a shared aversion to serious relationships—a perfect match, until attraction flares into something more.

Angel has come to town to work with Ford Maddox as the senior trainer for his security services company. Meeting Taryn, the brains behind Score, the new PR company settling into town, Angel is fiercely attracted to her, a woman who works with three retired football stars and isn’t intimidated by anything or anyone: “When in doubt, she put on a power suit and killer heels.” Taryn likes a guy who isn’t afraid to make a move, and as the two edge toward a physical relationship, she's eager to unravel the mystery of the ex-military man who is clearly different from the men she’s used to dating: “His clout didn’t come from a boardroom or the right suit. He carried it in his body. It was part of who he was.” Agreeing to a light, no-strings relationship, the two get to know each other better when Score does some preliminary work for a clothing line that caters to outdoor enthusiasts, something Taryn knows nothing about. Angel agrees to help her navigate sports and camping if she’ll help with a volunteer project he’s been wrangled into by the town's enigmatic mayor. Of course, working more closely means more emotional risk, and as their circle of mutual friends expands, both Taryn and Angel must navigate feelings they don’t expect—and which may not be altogether welcome. Mallery returns to beloved Fool’s Gold with another new company moving in—clearly the Score football boys are in line for their own books—as the security-company employees wrap up their romantic campaigns. Fans will be delighted with the same strong storytelling and modern-day fairy-tale quality Mallery always brings to this magical town with its mysterious mayor.