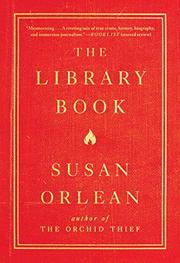 An engaging, casual history of librarians and libraries and a famous one that burned down.

In her latest, New Yorker staff writer Orlean (Rin Tin Tin: The Life and the Legend, 2011, etc.) seeks to “tell about a place I love that doesn’t belong to me but feels like it is mine.” It’s the story of the Los Angeles Public Library, poet Charles Bukowski’s “wondrous place,” and what happened to it on April 29, 1986: It burned down. The fire raged “for more than seven hours and reached temperatures of 2000 degrees…more than one million books were burned or damaged.” Though nobody was killed, 22 people were injured, and it took more than 3 million gallons of water to put it out. One of the firefighters on the scene said, “We thought we were looking at the bowels of hell….It was surreal.” Besides telling the story of the historic library and its destruction, the author recounts the intense arson investigation and provides an in-depth biography of the troubled young man who was arrested for starting it, actor Harry Peak. Orlean reminds us that library fires have been around since the Library of Alexandria; during World War II, “the Nazis alone destroyed an estimated hundred million books.” She continues, “destroying a culture’s books is sentencing it to something worse than death: It is sentencing it to seem as if it never happened.” The author also examines the library’s important role in the city since 1872 and the construction of the historic Goodhue Building in 1926. Orlean visited the current library and talked to many of the librarians, learning about their jobs and responsibilities, how libraries were a “solace in the Depression,” and the ongoing problems librarians face dealing with the homeless. The author speculates about Peak’s guilt but remains “confounded.” Maybe it was just an accident after all.