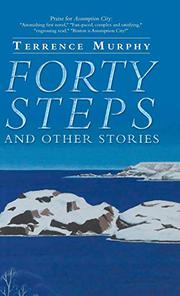 FORTY STEPS AND OTHER STORIES

Sixteen tales span about 1,000 years as a New England town emerges, becomes an art colony and tourist destination, and faces a dark age.

This collection returns to Murphy’s (Assumption City, 2012) fictional community of Egg Rock on Massachusetts’ North Shore. In an elegiac tone that brings to mind Edgar Lee Masters’ 1915 poetry collection Spoon River Anthology, the tales follow characters as they make important decisions and show the ramifications of their actions. The book opens with Vikings arriving at a “magical” paradise—the future Egg Rock. The stories then sail on to address the town’s early-1800s ice trade with the Caribbean; the impact of prejudice on Boston’s Irish community during a cholera epidemic; New England’s abolition and pacifist movements before the Civil War; the dangers of 1880s lighthouse-keeping; mental health care in the early 20th century; U-boat spying during World War II; the agony of veterans following various wars; and the rise of feminism. The book breaks the narrative flow with a compelling literary experiment, as “John’s Peril I” and “John’s Peril II” offer different outcomes for the same character. It’s reminiscent of author Jack Finney’s twig-in-a-stream concept in Time and Again (1970), showing how small occurrences bump into one another to alter history. Indeed, the idea of cause and effect forms a strong undercurrent in this collection—one that results in intriguing effects. In “Shore Leave,” for example, a lighthouse keeper’s wife teaches her son, Ben, everything she knows about the heavens (“She made sure Ben saw moonrises and moonsets and the morning and evening stars”), and, by doing so, she inadvertently sets in motion Ben’s undoing in “Bottoms Up.” Readers may wish that the author provided a map of the many characters in these tales, but they’ll still find it fun to track their connections.