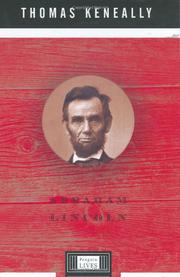 A fine, brief life of the Great Emancipator by the Australian novelist (Woman of the Inner Sea, 1993, etc.) and biographer (American Scoundrel, p. 31, etc.).

Keneally voices an antipodean appreciation for Lincoln as a child of the rough, violent frontier, a milieu that did much to forge his character and sorrowful countenance. (Lincoln once remarked to a journalist of his childhood, “ ‘The short and simple annals of the poor.’ That’s my life, and that’s all you or anyone else can make of it.”) From this setting, the author teases out little-reported data, including the fact that while serving in the frontier militia, Lincoln may have contracted syphilis from a prostitute, which led him to much subsequent worry about his fitness as a father—though not, as it no doubt would in the present political climate, to any public scandal. Keneally’s Lincoln is a man of extraordinary character built against extraordinary odds, but also a man of ordinary mortal failings, as fond of dirty jokes as he was of the works of Daniel Defoe and William Shakespeare. He emerges in these pages as nothing short of a hero, though a human one; this slim volume does not in any way resemble Carl Sandburg’s two-volume hagiography. Keneally conveys an informed understanding of just how controversial Lincoln was in his time (he writes, for instance, that the “house divided” speech ran the risk of killing Lincoln’s political career, which was salvaged largely by soundly showing up opponent Stephen Douglas in the barnstorming debates of 1858) and just how close he came to failure in attempting to restore the Union, which even Lincoln’s great admirer Horace Greeley was moved to call “our bleeding, bankrupt, almost dying nation” during the reelection campaign of 1864. In short, his view of Lincoln is so fresh that one wishes only that the Penguin Lives format afforded Keneally room to say still more about this iconic leader.

Exemplary and illuminating, even for readers well versed in Lincolniana.