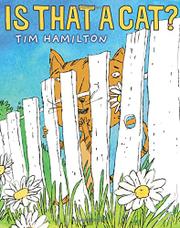 IS THAT A CAT?

Will this series of mistaken identities have a happy ending?

“I wish I had another cat to hang out with,” says an orange tabby. Then she sees what she thinks might be the crook of a cat’s tail outside the window. When she goes to investigate, she finds an elf hoping for rain so he can test his new umbrella (the crook the cat saw). The elf thinks he’s found his rainstorm, but it’s the copious tears of a bear who’s sad he’s lost his boot. The bear thinks he sees his boot off in the distance, but that turns out to be the nose of a dog looking for a bone. The group grows with each case of mistaken identity, until, with a bird looking for a worm, they all find a boy filling his pool and hoping for a party of friends. When a group of kids passes him by without a glance, the cat asks the boy if the ragtag bunch of questers could stay and have a party. Much splashing fun ensues. Hamilton’s easy-reading picture book, told all in apparently hand-lettered dialogue bubbles, is a nice twist on the cumulative tale. Listeners and young readers alike will enjoy trying to guess what each item is before it’s revealed. The author’s scratchy watercolor-and-ink cartoon illustrations are, of course, a perfect match.

Even the endpapers are in on the fun.