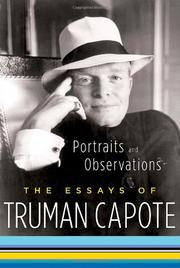 The Essays of Truman Capote

“I’d never known anyone who wrote,” Capote once remarked of his small-town Southern childhood, the start of many a story. “Indeed, I knew few people who read.”

He has been dead for nearly a quarter of a century, and Capote would be chagrined to find that, yes, few people read, and fewer read him now than in his heyday, despite two recent films devoted to his life circa In Cold Blood. This well-made selection of essays, excerpts and interviews memorializes the Capote who was at once more and less than the careerist literary journalist of that era—the bon vivant who fed himself baked potatoes stuffed with caviar; the haunted romantic who declared that the most beautiful word and the most dangerous word in English were one and the same: love. He was also the gossip, social butterfly and hanger-on who did not like actors (of John Gielgud: “all his brains are in his voice”; of Marlon Brando: “No actor . . . has transported intellectual falsity to higher levels of hilarious pretension”) or politicians except, strangely, Ronald Reagan and Adlai Stevenson, but who always managed to be around actors and politicians. Capote is largely remembered today as a personality, a celebrity and Tonight Show fixture, but he was a brilliant writer first and always. This anthology gathers many pieces that stand up well against anyone’s work, as with his description of a New York heat wave or of the tony-crowd, pre-jetset life on a Mediterranean island (“Ischia was no place for the rush of hours, islands never are”). The best parts find Capote at his most relaxed, inclined to make fun of his many peculiarities, especially when they butt up against others’ eccentricities. Capote’s account of a chicken dinner with a famed artist gone awry is one of the funniest pieces in the culinary literature and a pleasure in any context.

Capote’s about due for a revival. This is the sampler to spark it.