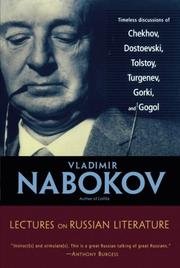 These 1950s Cornell lectures address a subject on which you would expect Nabokov to be nonpareil. And indeed things start off in brisk, trumpeting fashion, with a 1958 overview entitled "Russian Writers, Censors, and Reading": "If we exclude one medieval masterpiece"—it's very much like Nabokov not to tell us which it is—"the beautifully commodious thing about Russian prose is that it is all contained in the amphora of one round century." Then, hard on that, comes the book's north star, an essay on Gogol: "Fancy is fertile only when it is futile"; the "remarkable creative faculty of Russians . . . of working in a void." Yet as spectacular and epiphanous (and basic to Nabokov's belief in what literature should be) as this essay is, it is nothing new; it is an excerpt from Nabokov's great book on Gogol, which is still in print. The original material here consists, rather, of lesser lectures on other Russian masters. True, as in last year's Lectures on Literature (English and American masterworks), these textual guidings take us chapter-by-chapter through the book in question, with excerpts. But while those excerpts are unusually, unnecessarily copious—far bulkier than usual in critical writing—Nabokov's own interpretations and examinations often seem skimpy or capricious. He's tepid on Turgenev, lightly dismissive: "When Turgenev sits down to discuss a landscape, you notice that he is concerned with the trouser-crease of his phrase; he crosses his legs with an eye upon the color of his socks." And even more perfunctory are the quick back-of-the-hand smacks he gives to Dostoevsky (whom Nabokov sees as an overwrought playwright at best, no novelist) and the equally despised Gorky. Fuller, yet never quite full, are the discussions of the two Russians, apart from Gogol, whom Nabokov does approve of: Tolstoy and Chekhov. On Anna Karenina, he is as energetically specific as he was on Dickens' Bleak House in Lectures on Literature; he loves Chekhov for the "odd little details which at the same time are perfectly true to life." But, unlike last year's collection, this one never develops a consistent, coherent sense of fictional values: Nabokov begins by crowning Gogol for his supra-realism, for the plasticity and surprise of his prose—and then he completely switches his criteria to praise the humanitarian, minute qualities of Tolstoy and Chekhov . . . while damning their supra-realistic, surprising contemporaries. Furthermore, he never even acknowledges this contradiction; and so one merely finds him in alternating, extreme states here—in a mandarin pet over the writers he so unprofoundly dismisses, milkily docile and restrained about those post-Gogol writers he admires. Why this iffiness from a great critic hardly known for waffling? It could be, perhaps, that Nabokov felt himself in competition with these writers of his mother tongue. And this book may well be more revealing about VN himself than about his literary forebears. In any case, it's a disappointing follow-up to the previous, dazzling Lectures—with only one great essay (available elsewhere) and much of the space taken up by over-extensive excerpts.