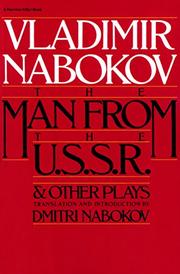 MAN FROM THE USSR & OTHER PLAYS

Two essays on drama highlight this rather marginal contribution to the Nabokov oeuvre—and Nabokov approaches theater in a dismissive, acerbic humor, much as he approached Russian literature in the recently published Lectures. Nabokov asks, conservatively, for the absolute retention of a single crucial dramatic convention, regarding spectators and the play onstage: "The first is aware of the second but has no power over it. The second is unaware of the first, but has the power of moving it. Broadly speaking, this is very near to what happens in the mutual relations between me and the world I see, and this too is not merely a formula of existence, but also a necessary convention without which neither I nor the world could exist." And, conversely, less persuasively, Nabokov sees tragedy—ever since Lear, Hamlet, and Gogol—as being hobbled by conventional cause-and-effect, deaf to accident: "What even the greatest playwrights have never realized is that chance is not always stumbling and that the tragedies of real life are based on the beauty of the horror of chance—not merely on its ridiculousness." The four plays here, however, embody Nabokov's rules-for-drama to, at best, a very limited degree. Two one-acters in verse—about Capt. Scott at the Pole, about a chance reunion between an executioner and one of his almost-victims—are thin and shapeless. The two longer plays, both set in Russian-Ã‰migrÃ‰ milieux, do illustrate a vaguely comic apprehension mixed with self-dramatization: the title drama concerns Ã‰migrÃ‰ fears about a possible Soviet agent; a comedy, The Event, involves a painter in fear of being shot once again by the man (his wife's ex-lover) who has already tried to kill him. Indifferent playwrighting, mildly provocative essays: a minor addition to the Nabokov shelf.