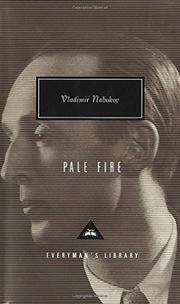 Another wholly different, baffling, brilliant book, full of word plays and tricky meanings. "Man's life as commentary to abstruse / Unfinished poem," writes the old poet, John Shade, in a long, personal, old-man's poem about life and death. Shade (happily married) and Charles Kinbote (homosexual) are teachers at Wordsmith College. What Kinbote does with Shade's poem, after Shade's death, supplies the kernel of the story — that, and what his deed does to him; and the whole development with its odd perversions and symbolisms is at times marvellously funny, often poignantly tragic. Perhaps, since the obscure symbolism forces the reader into reflecting Kinbote in a Kinbote-type, personal commentary, it would be unfair to give away more of the plot (if so it can be termed). The book is a box-within-boxes joke. Perhaps this is to be expected of Nabokov, as are also the dazzling flash of reversible meanings, puns, marvelously tangible writing, and cold, frightening resemblances to reality. Major publisher backing, for this is Nabokov's first novel written since Lolita. Count on intellectual snob appeal.