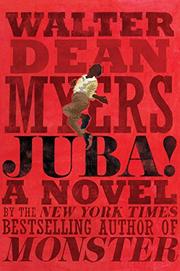 Juba, a freeborn young black man, dreams of making it big as a dancer in antebellum New York City.

The late, acclaimed Myers chose the real-life story of William Henry Lane, arguably the most celebrated black performer of the prewar era, as the basis for this historical exploration. Combining extensive research and deft storytelling, Myers chronicles Juba’s struggle to perform with superb skill and dignity instead of the degrading “cooning” and blackface that minstrel shows demanded. When the novel opens in 1842, 17-year-old narrator Juba lives “more or less” on his own. Longing for a chance to make a living as a dancer on his own terms, he’s adopted a stage name, Master Juba. In the meantime, he works as an assistant to a smoked seafood seller. Through the authentic voices of his characters, Myers re-creates the New York City of the era, where free blacks like Juba coexisted with their equally impoverished white immigrant neighbors, and they faced the ever present threat of being captured and sold into slavery down South. Readers may be impatient with the slow pace of the first half of the novel, but that will give way as Myers’ moving prose captures the dizzying speed with which the immensely talented Juba’s star eventually rises.