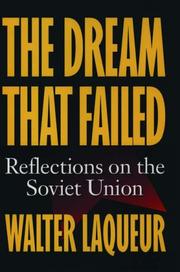 THE DREAM THAT FAILED

Reflections on the Soviet Union

An expert pathologist's report on the death of the Soviet Union. Laqueur (Black Hundred, 1993, etc.) is one of the most distinguished long-time students of the USSR's condition. Chairman of Washington, D.C.'s International Research Council, Center for Strategic and International Studies, he gives most of his attention to the failure of western academics and experts to understand what was going on in the Soviet Union, from the early years of the revolution to its uncannily swift demise. He reveals the full extent of the errors in the academic analysis of the years before 1989, when scholars argued that the USSR and the West were two converging systems that would meet without dramatic political change. The CIA, in line with academic economists, may have exaggerated the GNP of the Soviet Union more than tenfold; figures published by the Economist in 1992 suggest that Russia's gross domestic product may have been no larger than South Africa's. Similarly, almost to the end, some of the leading figures in American Soviet studies were writing about the stability of the USSR. Laqueur, who did not, notes dryly that ``seldom, if ever, in intellectual history has a school of thought been proved so dramatically wrong by subsequent events.'' He finds the explanation for the misjudgment in ideological bias, cultural parochialism, and prevailing fashion. As to the causes of the fall, Laqueur believes that the Soviet leadership, economically overextended and increasingly conscious of the extent to which the Communist world lagged behind the West, was suffering an acute crisis of self- confidence and lost its nerve. Perhaps, he suggests, in a particularly subtle insight, Gorbachev, misled by the failures of Western analysts, underestimated the extent of the dissatisfaction pervading the Soviet empire and overestimated his ability to reform the system. Not always well organized, but wide-ranging, learned, and full of the insights of a lifetime of scholarship.