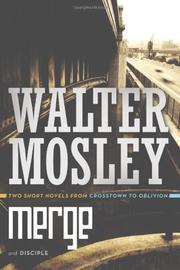 Two more novellas in one volume, continuing Mosley’s Crosstown to Oblivion series (The Gift Of Fire / On The Head Of A Pin, 2012), the common theme being, "a black man destroys the world."

Longer, more substantial and carefully worked-out, Merge begins when Rahl Redman notices something resembling a dead branch in his apartment. The being, an Ido, is one of many refugees from a remote planet with an eerie and complex ecology. He feeds the creature, and slowly, it transforms into something approximating human. Meanwhile, the news is rife with stories of other Ido that drink blood, spew poison gas or explode. They can only survive on Earth by merging with an existing life-form. Earth’s governments, meanwhile, decide that the Ido represent an existential threat and prepare to use any and all means to exterminate them. Rahl decides to merge with his Ido and help their race—an action that will bring him through transcendental bliss and unimaginable agony to, perhaps, salvation. Disciple, by contrast, is the more mystical, less logical, and weaker partner. Hogarth “Trent” Tryman, a nonentity toiling in a dead-end job, receives a bizarre instant message from someone calling himself Bron. What Bron has to say seems unbelievable, but in a matter of days, Hogarth finds he’s now the boss of the corporation. Bron, it emerges, serves a godlike entity called the Stelladren, which if it dies, will wither the souls of all intelligent beings everywhere. But to preserve the Stelladren, most of humanity must die. So what is Mosley offering here? Analogy, parable, allegory? Are only black Americans disaffected or alienated enough to go along, or do his protagonists just happen to be black?

For thoughtful readers, the questions posed by the book are well worth pondering.