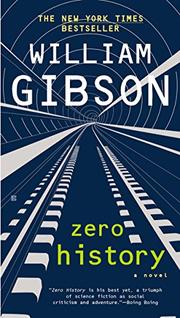 A comfortable narrative familiarity deriving from the recurring characters (most of them appeared in one or both of the previous books) and motifs—Russian gangsters, pattern recognition, motorcycle couriers, the virtual certainty that somebody, somewhere, is listening—eases us into the action, which occurs, metaphorically at least, in London and Paris, aspects of GibsonWorld with slightly different accents. Shadowy mogul Hubertus Bigend provides the motivation for everything that ensues, through his constant need to live on the edge; if no edge is available, he'll manufacture one. He rehires Hollis Henry, a former vocalist for a famous rock band now down on her luck, to investigate a line of superbly made clothing, Gabriel Hounds, a brand whose method of achieving exclusivity involves rendering itself virtually nonexistent: It has no outlets, no factory, no offices, no sales force. Bigend also hopes to procure a recession-proof contract to design military apparel. Previously he dispatched drug-addicted translator Milgrim to an expensive Swiss clinic to be straightened out, merely to see if it was possible. To test Milgrim's newfound mental architecture, Bigend now sends him to investigate a new line of military-style clothing, unaware that he's stirring up a well-connected and touchy arms dealer about whom U.S. intelligence also is curious. Hollis's ex-boyfriend, daredevil Garreth, who jumped off the tallest building in the world only to get run over by a Lotus, enters the mix. Gibson's plotting or characters rarely compel—the (mostly offstage) spooks and thugs—and the off-kilter romances seem amateurish, even clownish. What matters are the highly textured, brilliantly evocative prose and the stunning insights Gibson offers into what we perceive as the present moment—the implication being, per the title, that's all we have left.

Unsettling and memorable, weird flaws and all.