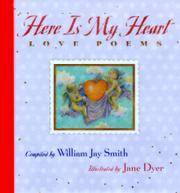 HERE IS MY HEART

Smith has gathered often humorous, always amorous poems from the traditional to the new, from contributors with household names to the poetically omnipresent Anonymous. Among the stellar items are selections by Langston Hughes (“I could take the Harlem night/and wrap around you,/Take the neon lights and make a crown”), Kenneth Koch (“One day the Nouns were clustered in the streets./An Adjective walked by, with her dark beauty”), Donald Hall (“Chipmunks jump, and/Greensnakes slither./Rather burst than/Not be with her”), and Robert Frost (“The rose is a rose,/And was always a rose,/But the theory now goes/That the apple’s a rose,/And the pear is, and so’s/The plum, I suppose”—playing on the old rhyme “If Apples Were Pears,” which is also included). Cock Robin is here, as are such characters as the Old Woman and the Marmalade Man; Jack Prelutsky and William Shakespeare also make appearances, and so does the former poet laureate himself: “Now touch the air softly,/Swing gently the broom./I’ll love you till windows/Are all of a room.” Dyer contributes delicate, colored pencil drawings to the book, which is about the same size as a valentine. (index) (Poetry. 4-10)