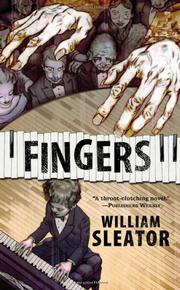 Sam's mother concocts an impossible scheme to rescue younger son Humphrey's musical career, and the unlikely plan seems to work in this loony, unstrained narrative. Humphrey wakes up believing he has become the medium for deceased gypsy pianist/composer Laszlo Magyar; his family describes his strange behavior the night before and a new score is in his hand. What's more, even music specialists in the audience of his otherwise lackluster concert acknowledge both the Magyar style in the piece and Humphrey's higher artistry in the playing. Suddenly, he's in demand, playing Milan, Geneva, Vienna. In truth, though, his family is tricking him: Sam actually writes the compositions and their mother drugs Humphrey with Seconal so he won't remember the night before. But then weird things happen that also happened to Magyar, and a strange old man appears at the end of each performance, correcting the composition. Sleator has his own choice parody here as Sam takes his inspiration from hotel radiator noises and reads in a biography of Magyar hilarious gypsy anecdotes. But their situation rests on harsher realities and includes some sad truths of family life. Jealousy and other feelings force Sam to spill the beans to increasingly uppity Humphrey—who really suffers from the news—yet that stage mother still wants the show to go on. Sam tells it all with such brisk good humor that though the parents are manipulative the story is not. Even readers unfamiliar with music terms and room service menus can follow the notes and savor the gypsy in these souls.