Bradley R. Blankenship is a first-time author working on multiple manuscripts while taking his big leap into self-publishing. Using his small business front of Remverse Studios, he works with friends and colleagues to deliver new story experiences, including YouTube AV Books, cross-media tie-ins, accompanying sketch work and behind the scenes articles, and mascot promotions.

The stories he loves to tell blend elements of fantasy, science fiction, horror, and thrillers. Though he maintains several wikis of knowledge about worlds and ideas from unpublished short stories and novellas, his ambition is to craft multiple series of books set in his larger world setting, the Remi's Cross Saga.

At an early age, Brad found his passion for reading while struggling through instruction manuals and onscreen text with his favorite video games Final Fantasy and The Legend of Zelda. As he grew up, he poured over every fantasy novel he could get while enjoying the self-same attractions that drew him into stories both as a concept and device for expression. In high school, this transitioned into writing small screenplays and dramas to portray during late-night tabletop sessions. These ideas then transformed into his first short stories and novellas in college, culminating in a need to express the worlds and adventures in his mind.

Brad finds much of his inspiration in video games, anime, a broad spectrum of fiction, and mythology. He enjoys trying new writing techniques, telling stories from different perspectives, and worldbuilding.

He currently resides in Seattle, WA, with his girlfriend Ami and two cats, Edgar and Irkalla.

“A confrontation between beings of order and chaos endangers a remote humanoid village in this fantasy series opener... The finale, packed with Clive Barker–style phantasmagoria, is a gory bow atop all that’s come before it. A vivid fantasy with shocks that accompany the author’s inventiveness.”
– Kirkus Reviews 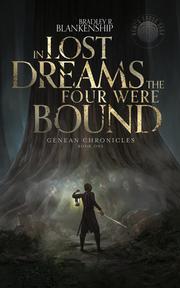 IN LOST DREAMS THE FOUR WERE BOUND

A confrontation between beings of order and chaos endangers a remote humanoid village in this fantasy series opener.

The Hyunisti talvuo live in a canopy village of the Lorinian Witchwood. Among them is a hermit named Elis Renai. She’s adopted an orphan named Rais and is the lover of Neris, a Delvori healer recently arrived at the village. Neris and her brother, Nerin, joined the Hyunisti six months ago. Neris cares for a mysterious patient known as the Virage, who has a demon “claw” on his left hand. She keeps him comatose with herbal potions. Her brother, meanwhile, is under the sway of imprisoned wizard Lord Madrus Ohran, who wants Nerin to “overthrow the false kings of humankind” on the road to greater power. Nerin chooses women from among those he sleeps with to sacrifice to Ohran in an underground fortress that once “served as a seat of magic” to the Emri, powerful talvuo ancestors. One woman Nerin hasn’t yet rendered loyal but must for the sake of his machinations is Elis. She’s the only Hyun unaffected by a curse that quickly ages everyone else in the village. Elis’ relationship with Neris isn’t rattled by the healer’s brother but by the sleeping man, once he wakes. This is Davnian, who, with his clawed hand, is the former lover of Neris and, as the Virage, capable of halting Ohran’s plans. Above the planet, a space station watches the proceedings after a destructive run-in with the Virage.

Blankenship opens his series unconventionally with a scene of nightmarish SF. Aboard the Ientec Prime space station, the android GH-199076492 is corrupted and destroyed by the invasive entity Sael. A grisly moment of bodily possession unfolds as “beneath her torn skin and coagulating ochre gel, small cables and wires slithered.” Most of the rest of the narrative happens in the Witchwood among the elflike talvuo, who live in lavishly carved tree abodes and have furry, triangular ears like dogs. The author keeps the true nature of Davnian hidden early in the narrative, offering chapters from his dream-locked perspective under the heading “Unknown,” with his blackened claw adding an ambiguous element of menace to the waking world. But Nerin is a clear villain who scorns not only the Hyun as pawns to seduce and control, but also women in general: “Passivity was a common trait of the finer sex, something he lamented but could not help but exploit.” Throughout, readers will notice an escalating sexual motif. Neris isn’t just the lover of Elis, but also of Davnian and a hunter named Bedimer, all the while erotically manipulating her brother. Lines like “She let out a low, guttural growl, surrendering to her ravenous desire” paint Neris as an effective seductress. Yet a later scene of juvenile rape erodes the novel’s escapist potential, and it seems as if Blankenship is testing his audience’s tolerance for depravity. The finale, packed with Clive Barker–style phantasmagoria, is a gory bow atop all that’s come before it.

A vivid fantasy with shocks that accompany the author’s inventiveness.

"The man in black fled across the desert, and the gunslinger followed" -- The Gunslinger, Dark Tower Book 1

Create unique worlds and stories for others to engage with.