Aaron Stander has worked in the literary vineyards for more than five decades. He has been a college English professor, educational consultant, and teacher trainer. He has published numerous articles, stories, reviews, and ten crime novels. Aaron is also the host/producer of Interlochen Public Radio’s longstanding monthly program, Michigan Writers on the Air. Aaron lives deep in the woods of northern Michigan with his wife and his dog. When not writing or thinking about writing, Aaron spends a lot of time kayaking along the shores of Lake Michigan and Lake Superior.

“Stander’s prose is controlled and sparse, evoking both Ray’s deliberative personality and the midwinter Michigan landscape: 'He lifted his head and watched as the truck quickly disappeared into the swirling snow. Then he looked around. The mangled remains of a snowmobile were mired in mud just below him in the ditch.' While certain aspects of the plot are a tad predictable, others are wonderfully unexpected, and the author’s practiced pacing should keep readers engaged throughout. Fans of the series should be pleased with this engrossing episode. A well-told mystery that involves Midwesterners forced to grapple with their town’s past.”
– Kirkus Reviews 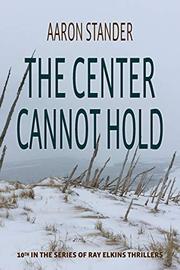 This 10th installment of a series focuses on a sheriff with a new case rooted deep in a Michigan county’s history.

When the remote farmhouse that once belonged to his dead predecessor, Orville Hentzler, goes up in flames—its basement stockpile of guns and ammunition providing an explosive finale—Cedar County Sheriff Ray Elkins is tasked with discovering why. He knows that it’s arson, probably just some bored teenagers or a closet pyromaniac. Then Hentzler’s grave is vandalized. “When he was alive, people either loved him or they hated him,” remembers the cemetery’s groundskeeper. “He and his boys, you know, his deputies, they liked to crack heads....But he’s been gone awhile.” Could these incidents have anything to do with a hippie commune that Hentzler ran out of town back in the 1960s, the buildings of which were also subsequently and mysteriously burned down? Two duck hunters later report a cackling gunman shooting at their decoys with an automatic weapon. Soon after, a toddler is discovered abandoned in a snowy ditch, and the child’s mother is found dead, lying in her own house. These incidents—their variety and strangeness—demand some creative investigation from Ray and his partner, DS Sue Lawrence. All clues seem to suggest that these crimes are connected to the events of 40 years ago, but most of the people involved are long gone. What happens if a killer comes to town hoping to target Hentzler only to learn that he’s dead? Who will the killer go after then? Stander’s (Gales of November, 2016, etc.) prose is controlled and sparse, evoking both Ray’s deliberative personality and the midwinter Michigan landscape: “He lifted his head and watched as the truck quickly disappeared into the swirling snow. Then he looked around. The mangled remains of a snowmobile were mired in mud just below him in the ditch.” While certain aspects of the plot are a tad predictable, others are wonderfully unexpected, and the author’s practiced pacing should keep readers engaged throughout. Fans of the series should be pleased with this engrossing episode.

A well-told mystery that involves Midwesterners forced to grapple with their town’s past.

It's a tranquil October morning in northwest lower Michigan, a rural paradise of cherry orchards, blue lakes, and sandy shorelines. The serenity of the day -- and the season -- is shattered when an elderly woman walking her dogs along the beach stumbles upon the bodies of a brutally murdered couple. Sheriff Ray Elkins returns from his debut in the bestselling "Summer People" to track down the elusive killer of a vivacious and spirited young teacher. His search takes him into the dark side of an elite private school -- and into his own long-forgotten past. As Elkins unravels the mystery, the hunter becomes the hunted and one intrigue leads to another in this page-turner.

Winter is starting to loosen its grip on Cedar County along the shores of northern Lake Michigan. The first hints of green are becoming visible on the edges of the receding snowpack. On the inland lakes, the layers of ice that started forming in late November and December are slowly subsiding. The search for morel mushrooms is still three or four weeks off. But this year there is other treasure to hunt. Vincent Fox, an octogenarian, has self-published a book, Al Capone’s Michigan: The Secret Lost Treasure. Following the descriptions in the book, some of the locals are beginning to scour the beaches with shovels and metal detectors. When Fox suddenly goes missing, Sheriff Ray Elkins and Detective Sue Lawrence are confronted by a complex web of fact and fiction to sort through, and along the way, they discover new information to a decades-old unsolved murder.

Death in a Summer Colony

It’s a warm summer evening in Cedar County. A storm is just beginning to roll onshore from Lake Michigan. In the auditorium of the Mission Point Summer Colony, the audience settles in for a performance of a stage adaptation of Agatha Christie’s "Death at the Vicarage." By the first intermission the intense thunderstorm is overhead. The old auditorium reverberates to the violent tumult. Flashes of lightning cast eerie shadows through the rolling, heavily wooded landscape. Then the power fails. The building and surrounding countryside go black. When the electricity is restored, Ray Elkins, the Sheriff of Cedar County, is guided from his seat in the auditorium to the stage area. A member of the cast has been found fatally stabbed.

It's late November along the shores of northern Lake Michigan. Deer season has been open for a few days and Thanksgiving is just around the corner. A local TV anchorwoman is returning home from an early morning yoga class with her young twin daughters. She stops at the end of her drive and climbs out of her car to collect the mail from the box. As she turns back toward her vehicle, the bullet from a high caliber weapon tears through her chest. In this third book in this series, Sheriff Ray Elkins confronts both the dark history of his own department and powerful and wealthy adversaries who try to control the direction and reach of his investigation.

It has taken more than two decades, but the members of the Leiston School Winter Adventure Group of 1990 are finally reunited near their old school. The intimate gathering opens with the renewal of old friendships at a private Lake Michigan estate near their old school. But the alcohol-fueled camaraderie soon melts away as old rivalries begin to surface, as do old secrets -- one old secret in particular. Twenty-five years ago, this group headed into an Upper Peninsula wilderness for a winter camping adventure. They ended up stranded and cut off for days by a huge winter storm. When they were finally rescued, hungry and frostbitten, their chaperone was missing and so were the facts. Now, as the group assembles for a late morning brunch, someone else is missing. A search leads to the discovery of a body, and Ray Elkins, the local sheriff, is called in to investigate. But just like the first time, what happens at Leiston stays at Leiston, and Sheriff Elkins is greeted with hostility and a pact of silence.

Medieval Murders is a prequel to the Ray Elkins mystery series. If you are a reader of the series, you know that the first four books are set in Cedar County, an amalgam of the many lakes, forests, and towns found in northwest lower Michigan. In these books, there are references to Ray’s earlier professional life when he taught criminal justice at a large Midwestern state university. The plot in Medieval Murders revolves around the deaths of three members of the English department. It’s a younger Ray Elkins, more hair, fewer pounds, but still very grounded.

Murder in the Merlot

Autumn has come to Cedar County. It’s harvest time. The trees and vines in the orchards and vineyards are heavy with ripening fruit. For the tourists flocking to the tasting rooms of the region’s vineyards, the land- scapes and seascapes provide an elaborate tapestry of rich colors and textures. However, there is one discordant note in this pastoral splendor, the crumpled body of an international wine maven has been discovered in a steeply terraced vine- yard of merlot grapes. As Sheriff Ray Elkins quickly discovers, the roots of this crime run from the legendary chateaus of Burgundy to the exclusive watering holes of Chinese billionaires.

A heavy blanket of snow has been building up in the woods since early November and the inland lakes have had a solid covering of ice since December. Shelf ice, stacked ten or fifteen feet in places, has been building on Lake Michigan for weeks. Sheriff Ray Elkins, responding to a late-night home invasion call, discovers the brutal murder of a local artist at her home deep in the woods. Elkins works to understand complex lives and relationships as he pursues a brilliant and brutal adversary.

It is late June in Michigan's gold coast resort area. The summer residents are settling in for the season and the tourists are beginning to flood the highways and beaches. But the idyllic vision of a summer at the shore is suddenly shattered by a gangland-style shooting. This murder is quickly followed by the deaths of three more summer residents, each taking place under suspicious circumstances. At times hindered by local politics and the proverbial tension between the summer people and the natives, Sheriff Ray Elkins searches for the possible links between the four victims. As he probes into their tangled lives and dark histories, he finds both the motive and the possible murderer.
Published: June 1, 2003
ISBN: 1470131633