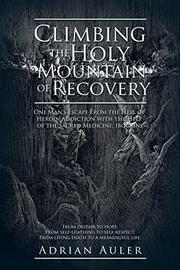 CLIMBING THE HOLY MOUNTAIN OF RECOVERY

A former heroin addict’s story of hitting rock bottom and finding a way back by unconventional means.

In his debut memoir, Auler describes in rich detail how, as he puts it, “I lost my soul by stages.” He details his youth during the 1960s, colorfully describing the campus of the University of Massachusetts at Amherst during the peak of hippie culture. He says that he always tried to maintain a balance between “Light” and “Darkness” in his inner life, which makes his description of his slow descent into drug addiction all the more gripping. While inquiring into the root cause of his migraines in his early 20s, he was diagnosed as “severely depressed and highly anxious.” He started abusing the Percodan that he was prescribed for his headaches and eventually descended into heroin and cocaine addiction. He found various methods of recovery, including methadone treatment, to be ineffective: “Our drug policy is outrageously out of touch with reality,” he writes. It’s only when he was at the edge of death that Auler heard about Iboga, which he describes as a “sacred shamanic plant medicine used by the Bwiti cult of the Fang peoples, found mainly in Gabon and Cameroon.” Through his own efforts and those of his support system, he arranged to take a drug derived from the plant, Ibogaine, at a facility on the island of St. Kitts. He says that the treatment changed his life: “Ibogaine detoxification is a powerful springboard with which to begin the journey of recovery,” he writes. The bulk of this book is a stark, memorable tour of more than two decades of heroin addiction, which Auler calls “a special kind of hell.” For the most part, his story markedly lacks a sense of hope, yet his narrative skill makes it a visceral read, as when he writes of reaching a point of drug toxicity that made him a kind of living ghost. His experiences will be familiar to readers of other drug-abuse memoirs, such as Jerry Stahl’s Permanent Midnight (1995) or Jim Carroll’s The Basketball Diaries (1978); they include overdoses, law enforcement encounters, serial abuse of friends’ and family members’ trust, and the deaths of other addicts. Still, he offers a harrowing and engrossing revelation of “the interior world of addiction.” For example, he begins the book by recalling the specific moment that he realized that he wasn’t in control of his drug use—and that it controlled him. He skillfully combines vivid description with an unflinching lack of sentimentality as he tells of scoring, hoarding, and dealing drugs while gradually succumbing to them. The most moving scenes are those that portray his final state, when he could no longer function—a living death of dope sickness. The book would have benefited from a stronger copy edit to catch some distracting typos: “The Hip Revolution was just breaking…like a tidal wave over the Establishment dykes when I enrolled.” However, the overall narrative is powerful and ultimately uplifting.

A colorful, involving account of decades of drug addiction.