Aimee Cabo Nikolov is a Cuban American who has lived most of her life in Miami. She is a trained nurse and the president and owner of IMIC, Inc, a medical research company in Palmetto Bay. She lives with her husband, Dr. Boris Nikolov, and her three children, Danielle, Sean and Michelle. Love is the Answer God is the Cure is her first book. Aimee is a radio host of The Cure, a motivational live radio show, syndicated through The Truth Network to more than 200 radios, and Sirius XM channel 131. The Cure is a place of healing, showing to people that have endured any difficulties that there is hope.

“Nikolov has a good ear for capturing the interpersonal dynamics of families under all kinds of stress. And the story swings back to an uplifting arc that will work on readers who've themselves seen some dark days and wondered if the future could be a little brighter.”
– Kirkus Reviews 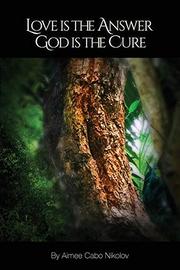 LOVE IS THE ANSWER, GOD IS THE CURE

A woman recounts her traumatic experiences, her redemptive love, and her abiding faith in God.

Nikolov’s debut memoir of her darkly traumatic past begins with her meeting a possible “Mr. Right,” an event she hoped might improve her life’s trajectory. The author, a Cuban-American with strong ties to the Dominican Republic, was on vacation there at Punta Cana with her free-spirited younger sister, Nicole, as the memoir opens. Nicole was eager to meet eligible guys, but Nikolov only wanted to relax and forget about men entirely—until she met “Dr. Boris,” a doctor from Bulgaria, whose gentle nature and dignified, respectful demeanor toward her won her heart and gained her trust. She found herself falling in love with “Bobby,” and this flows freely into the broadening of her memoir to tell her history of stark, almost unrelieved darkness. As a young girl, she was repeatedly sexually abused by the men in her mother’s life. When her older sister, Michelle, decided to intervene and call the police, the family was broken up, and Nikolov had all of this to confess to “Bobby” in order to be as honest as possible as their relationship deepened. He was unfazed, and the two got married—but the author’s troubles didn’t stop there. The narrative moves through more recounting of domestic stress, including Nikolov’s enjoying crack, which she describes as a “manic speed train out of myself.” Through it all, the author is often restored by her personal religious belief, although some of her faith observations seem a bit facile, shoehorned into the story of a complicated and morally challenging life. That life story is the most effectively done element of the book: Nikolov has a good ear for capturing the interpersonal dynamics of families under all kinds of stress. And the story swings back to an uplifting arc that will work on readers who’ve themselves seen some dark days and wondered if the future could be a little brighter.

A faith-infused, uneven memoir about navigating a turbulent life.

You Can Change Everything

"We can be beacons of light"

LOVE IS THE ANSWER, GOD IS THE CURE: Feathered Quill Book Award Gold/1st place for Memoir and Inspirational 2018, 2019

LOVE IS THE ANSWER, GOD IS THE CURE: Pinnacle Book Achievement Award, 2018