Albert Bartlett grew up on a small farm in Eastern Colorado. After graduating from the University of Colorado, Bartlett served in the Korean Conflict, returning to Colorado to teach English and coach football. After service four years as an educator, he returned to farming, eventually relocating to Gig Harbor Washington where he now resides. Albert Bartlett has written articles for several magazines, most notably Air & Space Smithsonian. He recently completed a year's tenure as a guest columnist for The Tacoma News Tribune. 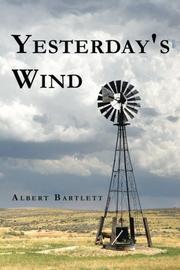 A panoramic novel traces the acrimonious feud between two generations of families and captures a slice of time in American history.

After Walter Hubbard marries his wife, Millie, he moves the two of them from Kansas to Colorado in search of a homestead land grant from the government. There are no more parcels available, but luckily Walter finds a farm being privately sold and a truck as well. Jack MacGregor, a wealthy, sometimes-unscrupulous landowner, also had his eyes on that property, along with just about every acre in the vicinity. When Walter refuses to sell his new farm to Jack, even in the face of generous offers, bad blood ensues. Later, when Walter needs an additional family income to buy more land from a friend, Jack actively tries to deprive Millie of an open position for a teacher. Later, Walter’s son, Andy, falls in love with Andrea, but Jack’s son, Cat, pines for her as well. Andy and Cat are close friends, but neither is willing is to give her up. In order to placate the powerful head of the MacGregor family, Andrea pretends to date Cat, all the while pledging her devotion to Andy. Andy eventually leaves for college, and the distance between him and Andrea, and the relentless pursuit of Andrea by Cat, strains their relationship. Briefly, Andy wrongly believes she left him, and he angrily enlists in the Marines shortly before World War II. Debut author Bartlett, a former English teacher, ably builds the tension between the Hubbards and the MacGregors, exploring the ways resentment and entitlement can be passed down through generations. The biblical tone of the story, and the vivid depiction of the plight of farmers heading into the Depression, is reminiscent of John Steinbeck’s East of Eden. The pace sometimes dawdles, and the dialogue seems more earnest than authentic, but the plot is masterfully executed. This is a long read at more than 500 pages, but it earns the reader’s patience and time.

An epic account of two families during a time of great poverty, turmoil, and opportunity.

On a dreary moonlight night in 1943, Malcolm Claussen patrolled the English Channel in his de Havilland W4052 Mosquito. His routine World War II patrol mission was disturbed when he encountered a roaring silver airplane larger than he'd seen before. With no insignia to identify the craft getting dangerously close to London, Claussen shot down this gargantuan airship just off the English shore. There were but two men in the U.K. who officially knew about the aircraft and its purpose: Air Chief Marshall Sir Hugh Dowding and Winston Churchill. There was, however, one person who unofficially knew: Matt Jacobson. While Matt was sworn to secrecy, his son was not, and after Matt's passing young Bruce Jacobson embarks on a search for the truth of this mysterious plane. Who built this plane, why was it so large, and why was it kept secret
Published: Aug. 19, 2013
ISBN: 978-1491807118