Alex Lee was born in Torres Vedras, Portugal, and grew up in the Caribbean where she was raised on three cultures: her mother's (Portuguese), her father's (Chinese) and Jamaica's. When the island's political troubles peaked in the late 1970s, her family made Toronto, Canada, their new home. Then still in her early teens, Alex immediately embraced the sensibilities of North America, and quickly discovered why snow-birding was as popular as snowboarding.

A professional writer with a degree in translation (French/English), Alex had always planned to author books "one day," but opted to take the more practical route of a career in commercial-based professional writing. Her unexpected break came a few years ago when an acquaintance (Dalton Yap) asked her to pen his memoir. A legal drama with twists and turns she could not have dreamed up, A Matter of Conduct has since paved the way for her dream career. Today she ghostwrites mainly literary non-fiction books, but still makes time for the sprint-like thrill of commercial projects.

Swapping her tuque for a fedora, Alex now lives in South Florida where she's working hard at perfecting her Spanglish.

“Measured yet passionate, a compelling look at one man's struggle against the worst of corporate blaming and the hard-earned wisdom that resulted from his fight.”
– Kirkus Reviews 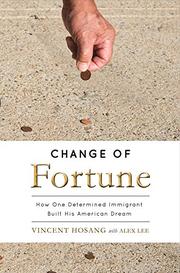 A Jamaican immigrant from a poor, rural background becomes a successful entrepreneur in New York City in this memoir.

HoSang’s debut (with co-author Lee) starts with his humble beginning, when he was born in 1940 in Springfield, Jamaica—a town with no electricity, running water, or paved roads. He was one of 10 children in an immigrant Chinese family, and constant poverty forced his family members to take jobs all over the island; he eventually apprenticed in his uncle’s small grocery. He would later take the lessons that he learned there about supply, demand, and location to the land of opportunity itself—New York, where he toiled as a milkman and factory worker, saving every penny. Opportunity eventually came in the form of a comfort food from his homeland: the Jamaican patty, a flaky turnover filled with beef, chicken, and/or vegetables, which would become the backbone of his food-production business, Caribbean Food Delights. HoSang slowly grew his company, as well as his family, persevering despite crises involving con men, inspectors, strikers, and debtors. All the while, he was spurred on by his desire to put distance between himself and his impoverished origins. HoSang’s memoir effectively portrays a life lived entirely through the lens of enterprise, and it’s full of advice that rejects the cynical shrewdness of typical business guides. Rather, this book is as upbeat as its author, never allowing itself to wallow in failure or self-pity and always emphasizing the importance of faith, focus, and constant hard work. In particular, it stresses the importance of the company that one keeps, as HoSang credits much of his own success to surrounding himself with people whom he trusted and admired. The book also includes firsthand testimonials from many of the key figures in his life, including teachers, partners, friends, and family members.

A striking memoir that’s full of advice, inspiration, and positivity. 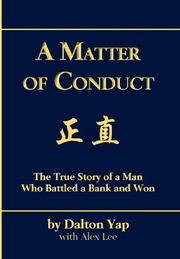 A MATTER OF CONDUCT

Many people will experience being fired, but, as Yap details in this cleareyed, often gripping memoir, his being fired was just the beginning of decadelong torment.

As a rising star at Citizens Bank, one of several prosperous Jamaican banks in the early 1990s, Yap seemed to have it all: a record of sterling employee reviews, leadership of an innovative and respected technology division, a harmonious multigenerational home life, and excellent pay, with the promise of more to come. His life was seemingly ideal, until early October 1993, when he was unceremoniously fired from his job and slapped with a multimillion-dollar lawsuit. Shamed by false accusations, his assets frozen, Yap turned to a local attorney and family acquaintance to try and fight the charges. The ensuing battle to clear his name and free him of the social and financial burdens took roughly a decade, culminating in his case before the Privy Council in London, the highest court for Commonwealth nations. With precision and passion, Yap relates the technical and legal details of his battle, which included the first use of the Mareva injunction in modern Jamaican history. Even when delving into the inner workings of contracts and chargebacks, the righteous anger and pained humiliation sizzle between the lines of Yap’s measured, self-deprecating prose. Almost as important as the technical details are the insights into Yap’s family life, which he highlights with understated sadness and bursts of both Jamaican slang and earthy profanity. Quotes from his wife, children, and friends round out the details of Yap’s tumultuous life during this period, and to his credit, Yap neither goes overboard in assigning blame nor ignores his own failings and mistakes that compounded his feelings at the time.

Measured yet passionate, a compelling look at one man’s struggle against the worst of corporate blaming and the hard-earned wisdom that resulted from his fight.

So many...!! But Malcolm Gladwell--now that's talent.

I was raised on music--from Fado to country to reggae. Today I'm a pretty good selector--especially for R&B. Maybe "deejay" next?