Alice Flynn has been a professional writer since 2004. She has a B.S. in business marketing from Portland State University and has extensive experience with research-oriented writing, and the ability to make complicated topics easy to understand. Ms. Flynn has masterfully applied her research and writing skills to both her father's story, Unforgettable: The Biography of Capt. Thomas J. Flynn (ISBN 978-1452814964) published in September 2011 and The Heroes of Hosingen: Their Untold Story (ISBN 978-1517268336), released in December 2015.

Unforgettable: The Biography of Capt. Thomas J. Flynn was her first self-published book. His incredible story won four book awards in 2012. Realizing there were many other families searching for the information she had found on her father’s WWII story, she shared the majority of her source documents on the book’s website to help other families looking for information.

It worked. She received such great response and so much more information from other families who had relatives that fought alongside her father that she decided to rewrite the war part of her father’s biography, making it the best account of what happened in the frontline village of Hosingen, Luxembourg in those critical first three days of the Battle of the Bulge. It is a very personal and powerful story as told by the men that were there, making it read more like a novel that an military record of events. The Heroes of Hosingen, Their Untold Story finally recognizes and honors those brave soldiers who were ordered to “Hold at all costs”, sacrificing themselves for time, but which ultimately resulted in their capture by the Nazis where they were forced to endure the unimaginable to survive.

Alice was also able to collaborate with several historians in Hosingen as well as the town’s mayor, who shared more unpublished details and a large collection of pre- and post-war photos of the town. Forty of these photos are included in the book and on the book’s website – www.HeroesofHosingen.com – to help the reader visualize the story as it unfolds. The Heroes of Hosingen has earned two awards in the Military History category and a glowing Kirkus Review as well as attracting the attention of more families searching for the story of their beloved veteran.

Ms. Flynn is passionate about helping other families uncover the stories their WWII veterans found hard to talk about. A native of Kimballton, Iowa, Ms. Flynn has lived in Portland, Oregon since the mid-1980s. She is married, has three sons and two grandsons and a black Labrador named Bullet.

“The prose is reliably limpid, and the author’s command of both historical context and tactical maneuvering is stunning. While a scrupulously researched study, the book possesses cinematic power, unfolding more like a work of fiction than an arid catalog of the past…This is history at its best: thoughtful, rigorous, and dramatically presented without embellishment. An important contribution to World War II literature.”
– Kirkus Reviews 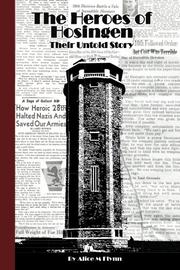 An exhaustive history examines one of the most significant battles of World War II.

The extraordinary battle in Hosingen, Luxembourg, between American and German troops remains sadly neglected, despite being one of the most significant engagements of the war, according to the author. When the 110th Infantry Regiment set up camp in the town, its purpose was largely to rest, and the unit was pleased to find Hosingen relatively unscathed by the war and hospitable. But Hitler, preparing for a massive resurgence of his battered army, set his sights on Bastogne, the way to which cut right through Hosingen. The Americans established a defensive position, and in December 1944, fought the Luftwaffe for nearly three days despite being greatly outnumbered and inadequately equipped. Hosingen was considered to be so strategically significant, Gen. Troy H. Middleton and Gen. Norman D. Cota ordered the men to “Hold at all costs!” American soldiers fought bravely against a force of 5,000 and ultimately wounded or killed 2,000. Nonetheless, on Dec. 18, the regiment, out of both ammunition and food and encircled by the enemy, had no choice but to surrender. This is the second book by Flynn (Unforgettable: The Biography of Capt. Thomas J. Flynn, 2011), and her father figures prominently in this one as well, since he was the executive officer of K Company during the defense of Hosingen. The prose is reliably limpid, and the author’s command of both historical context and tactical maneuvering is stunning. While a scrupulously researched study, the book possesses cinematic power, unfolding more like a work of fiction than an arid catalog of the past. Many of the men who surrendered suffered terribly at the hands of their captors, and the author covers this as well, providing the perspectives of eight prisoners of war. Sometimes the reader may feel crushed under the weight of so much minutiae—Flynn even provides lists of casualties by name—but the action is vividly described, making up for any information overload. The volume also includes a wealth of black-and-white photos and appendices that include newspaper articles from January 1945. This is history at its best: thoughtful, rigorous, and dramatically presented without embellishment.

"Lt Flynn discovered that his radio had been damaged by the concussion of an exploding shell…he dashed from cover to cover through the rubble-strewn streets of Hosingen, dodging German gunfire and shell bursts to reach Capt Feiker’s company command post."

Being creative and helping others

The Heroes of Hosingen: THEIR UNTOLD STORY: Best Book Awards Finalist in the History: Military category, 2016

Battle of the Bulge: the Heroic Stand at Hosingen by Alice M. Flynn and Allyn R. Vannoy

Article based on the Unforgettable: The Biography of Capt. Thomas J. Flynn in WWII History Magazine, Battle of the Bulge Special Edition, December 2014, https://pocketmags.com
Published: Dec. 1, 2014

Bravery at the Battle of the Bulge magazine article

3500 word condensed article, based on Heroes of Hosingen book, published in USA Today Magazine May 2017

WWII hero 1st Lt. Tom Flynn, Executive Officer of K Company, 110th Infantry Regiment, 28th Infantry Division, survived insurmountable odds during the Battle of Bulge, the Hürtgen Forest and four Nazi POW camps, only to return home to his beautiful, young wife with Unforgettable memories that would haunt him for the rest of his life.
Published: Sept. 10, 2011
ISBN: 978-1452814964